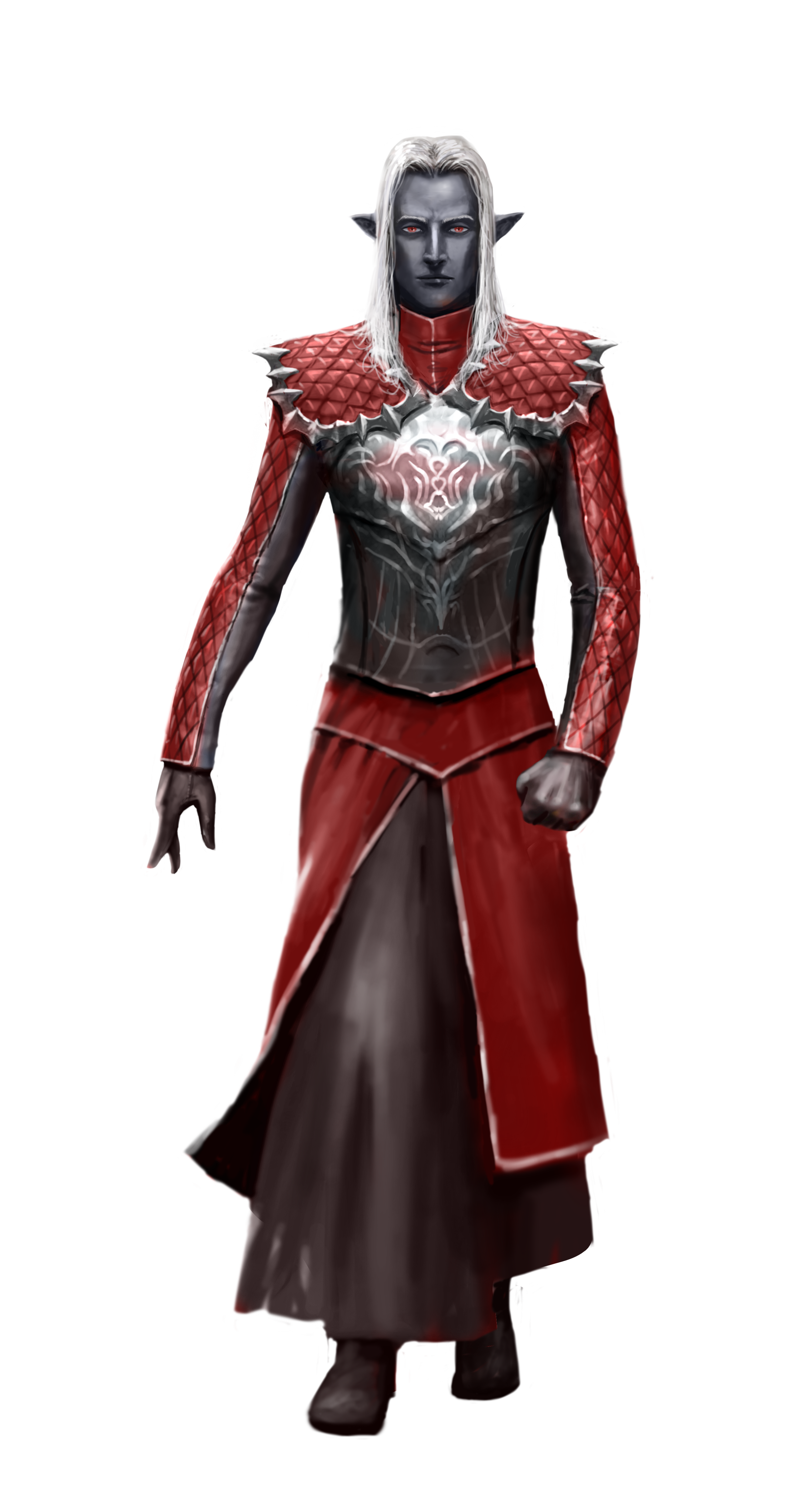 Beneath the surface of eastern Asarus, below the deepest reaches of the Angylis Sea, lies an incredibly intricate network of open caverns, chasms, tunnels, and passageways known as the Great Vault. Within this immense open expanse within the bedrock of Vathis lies one of the most dangerous and sinister cultures in the entire world, the empire of the dark elves, or the vae’rin as they are known on the surface. Scattered throughout the Great Vault are large cities constructed around the culture that has been crafted around vae’rin beliefs and their identity.

The life of a dark elf is saturated with a few core tenants and beliefs. Nearly every vae’rin understands that the expanse, influence, and power of their civilization is built upon the gifts that Serena has granted them, and her presence can be felt in nearly every facet of vae’rin life. Serena is, as far as the vae’rin are concerned, the sole deity in the multiverse, with all others being nothing more than the false gods of ignorant cultures and peoples.

As such, vae’rin widely believe themselves to be the epitome of intelligent life throughout the multiverse. No other creature, race, or being, except Serena and dragons, are above a dark elf. Due to this, slavery is rampant within vae’rin culture, and many powerful vae’rin houses possess more slaves than vae’rin. In turn, vae’rin take the pursuit of magical aptitude, divine, arcane, and otherwise, very seriously.

Serena’s teachings have imprinted the firm understanding that to gain glory in her view, is to increase one’s influence, power, and capability, so that all of her enemies may be crushed beneath your heels. Vae’rin in turn, take all threats against their cities, families, holdings, and themselves earnestly. Vae’rin families, or houses as they refer to themselves as, vie among one another for additional power and glory in Serena’s honor, but almost never directly or in plain view.

Vae’rin place no focus on gender when it comes to determining another vae’rin’s worth, but particular focus is placed upon females in leadership positions, as their progeny make up most of the strength of their family. It is not unusual for a different gender to be leading a family, on the whole, it is more common for a child-bearing female to be the leader of a house. Vae’rin leadership may be monogamous if a strong enough bond is formed, it is not unusual however for a harem of the opposite gender to gather around a powerful individual.

While individual vae’rin might contend with one another in their personal pursuit of their ambitions, houses that co-exist within a vae’rin city usually avoid any internal conflict within the city. Other cities throughout the Great Vault, on the other hand, are open for engagement. Economic, subterfuge, morale, and military plots are commonplace among the tactics used to gain an immediate advantage against another city. Sowing chaos and strife in your enemy is always the intent. Should a slight or casus belli be gained that is large enough, entire cities have turned their swords and spells against each other in the name of Serena’s grace. To survive is to succeed, to gain an advantage is assumed, to increase one’s station is to reign supreme.

Cities throughout the Great Vault all possess differing methods of the pursuit of power. Some cities focus on economic strength and willingly trade with cultures outside of the vault. Others put their concentration towards magical means, with places of learning and mental stimulation the focal point of their city. A great many however fixate solely on Serena and her teachings, with her clergy being the core of their might.

One thing is certain, the vae’rin as a whole are intensely focused on themselves and the politics of the Great Vault. This has severely fractured the identity of the vae’rin as a whole, and they care more about the identity of their cities than as a united vae’rin nation. While the Darkest War washed over the walls of the surface civilizations, it barely shook the cavern walls of the Great Vault. Should the vae’rin find an external foe to unite the entire Great Vault, there is little chance of that enemy surviving the first wave of the conflict.

To check out the Evernight Encounter table, head on over to our…