Folian, Born of Soil and Sunlight 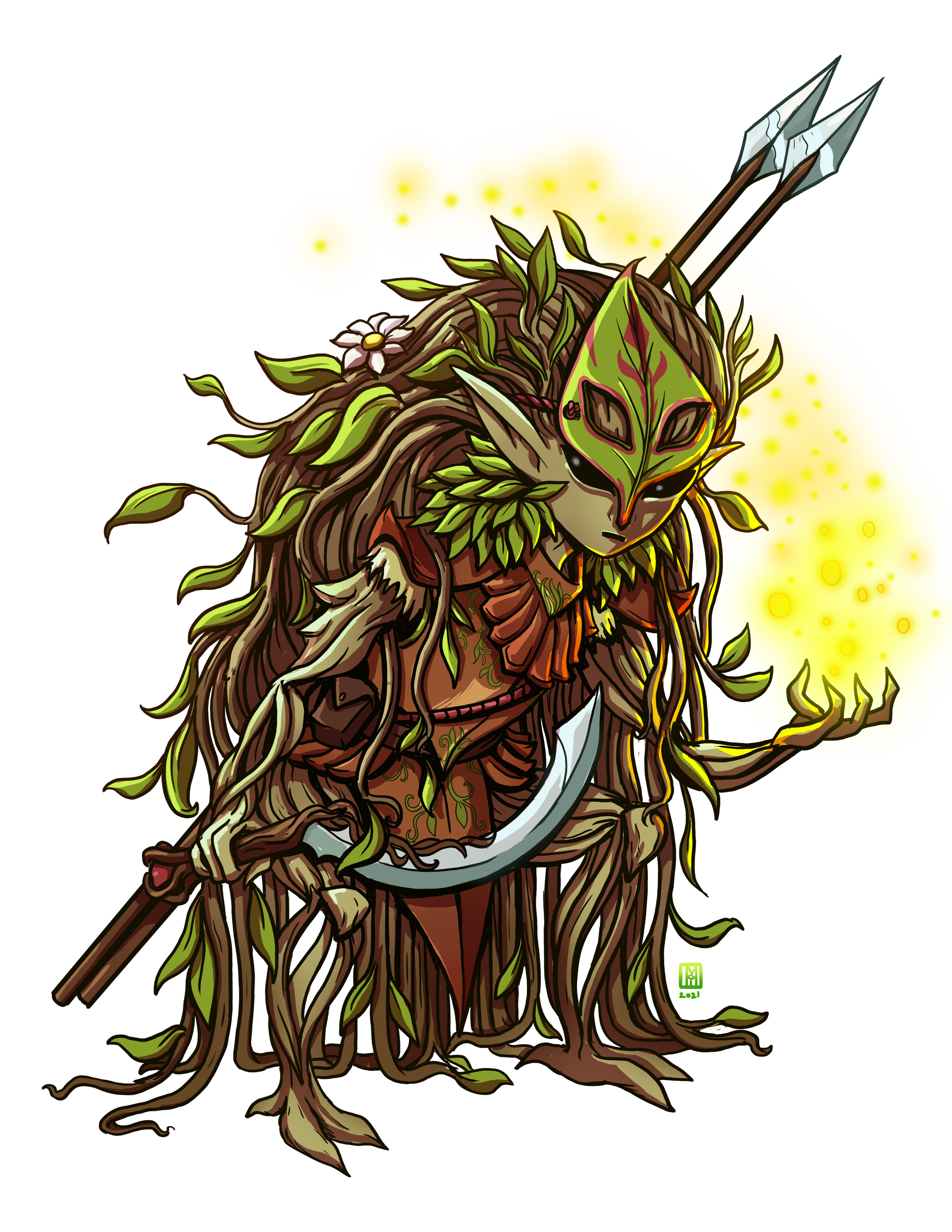 While the most common instances of the Arkhos Spawn coming about is directly tied to the death knells of the Vandiels, there are other ways that Arkhos Tears have formed on the Material Plane. The folian came into existence due to the actions of a powerful sorceress by the name of Jing Chao. Jing drew powers from an Arkhos Facsimile plane and combined them magic granted to her by the Shattered Hand, with the goal of corrupting the Borderlands, making them impassable. Years later, at the end of the Darkest War, the closing of the Scar Tear cut off the magic sustaining the corruption has begun to fade, causing the Arkhos Tear that Jing Chao used to grow more active, thus creating the folian.

The Arkhos side of the folian is associated with growth and fertility. Their innate nature is due to the particularly unique Arkhos that Jing Chao specifically sought the powers of to spread her corruption through the area. The souls that gave the initial folian life are the souls of the many halfling crusaders and remnant spirits of the halfling nation of Taloch. The folian’s creation was rapid, largely due to the fertile energies coursing through them. It was not long before the majority of the folian were united into a tribal community, hidden in the trees of the Jing Chao Swamp region. While the creation of their community was rapid, their secretive nature led them to remain hidden from the world for some time. While folian possess some general knowledge of the world, they lack any memories their souls once had. They are quite in tune with nature, exhibiting abilities that pair well with druidic practices and magic. Much of this proficiency comes from the latent corruption put in place by Jing Chao, which the folian have used to their advantage to control nature and the elements themselves.

The folian were first discovered by a group of Eyes of Vathis agents and their escorts who had ventured to the area. Upon seeing halflings among the group, the folian grew curious about their potential shared heritage, and eventually made themselves known to the group. Gradually what started out as an expedition for lost artifacts became a cultural outreach to the folian, leading to many of them becoming willing to venture into civilization and learn about the wider world. With the promise of safety beyond their swamp the folian have started to migrate, hoping to find their places in the world.

Most folian stand no taller than four feet or so high, with builds and stature similar to that of a halfling. However, their penchant for sneaking and remaining hidden leaves them frequently hunched over or squatting, achieving even shorter heights. Their entire body is composed of a green plant-like matter, with textures similar to that of leaves or foliage. Their eyes are large, pure black orbs on an otherwise humanoid face composed entirely of plant-like matter. Most notably, the tops of their heads tend to grow long vines in place of hair, with broad leaves or sometimes flowers sprouting out of them. These vines are seldom cut and often grow long enough to touch the ground, providing them an almost natural camouflage.

Folian tend to vary in appearance overall between individuals. What plant properties a folian takes on is largely determined by where the folian first emerges. Folian who undertake the merging travel to isolation and together produce a seed, which they plant in the ground and spend several weeks tending to. During this time, the surrounding area becomes incredibly fertile and plant life in the area booms. Finally the new folian emerges from the ground possessing traits of the surrounding plant life that have come from the merging. Folian variation is tied heavily to the idea that the Arkhos Essence that makes them up is that of growth, which is chaotic and manifests in many different ways depending on the environment.

Of all the Arkhos Spawn, folian were the quickest to rally together and begin creating their own culture. This is due to their rapid population growth as well as the necessity to do so in the hostile conditions of the Jing Chao Swamp. The folian have adopted a tribal mentality within their population as a whole. Traditional roles of elders, hunters, warriors, housekeepers, teachers, and many others have emerged in their budding society in the Jing Chao Swamp. They trust in their elders to make decisions to guide their tribes to safety and the betterment of their people.

The Jing Chao Swamp exists amongst the ruins of what was once flourishing halfling society. The ruins and leftover structures of many of these settlements are where the folian have made their home. Their matching sizes for the homes and buildings there make it a near perfect fit for them. The folian have a general idea of what many of the abandoned amenities are supposed to do, but opt to stick with their tribal ways instead, relying on the swamp and surrounding forests to survive.

While many folian still reside in their tribal abodes in the Jing Chao Swamp, the race has begun to venture outside of the safety of their trees to the world beyond. With the help of the Eyes of Vathis, many folian have traveled to major cities in Vavaire and Aurezia or even further. Here the folian are subject to a culture shock at how advanced the magic and technology of the world are compared to the many druidic practices they partake in back home. The folian have become quite interested in Rancagesh in particular, as many elders think the exotic and sometimes dangerous plants there hold the key to their race’s next steps of growth and evolution.

Folian are as varied in their personalities as humans. There is good in as many of them as there is evil. Where they truly align is their affinity for nature. They recognize that nature is inherently chaotic, while at the same time has certain rules. For this reason, most folian find themselves on the neutral scale of alignment.

Folian have been quick to adopt Valshathe as their patron goddess. In the ruins of Taloch, Valshathe was revered as one of the most important goddesses in halfling culture. These beliefs have shifted somewhat for halflings, but the imagery the folian have found has seen their reverence to her bloom. Upon learning more about her, the folian have come to view her as not only the goddess of abundance and agriculture, but also their true creator due to their unique creation circumstances. Whether this is true or not is moot, as the folian reverence for the goddess continues to be cultivated at an increasing rate as the years pass.

As with most Arkhos Spawn, folian are incredibly curious about where they have come from as a people. They look to better themselves and their tribe in unique ways and will often brave the outside world to protect the home they care deeply about. Their unique abilities and appearance have both their advantages and disadvantages in the adventuring world, with folian standing out in urban areas but being stealthily superior in areas of high vegetation. The folian’s adoption of druidic magics in the Jing Chao Swamp has led many of them to be potent casters and wielders of their own unique druidic arts.

Folian tend to keep their names short and to the point. Possessing no surnames, their names all tend to be single syllables in length.

To check out the new D&D 5e Folian racial traits, feel free to head over to our…