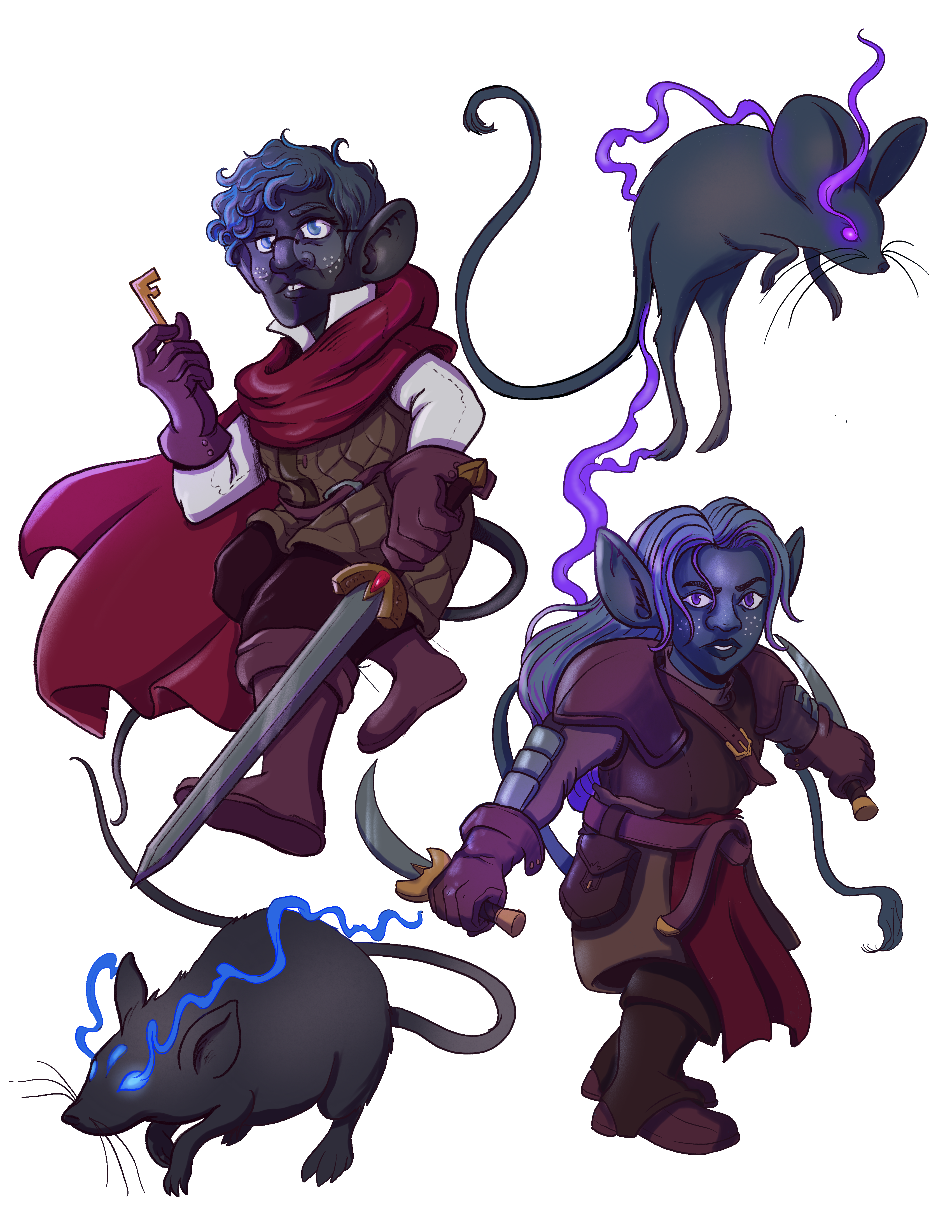 Muri, also known as the Children Of Shadow or Ratkin, are a race of elderlings that primarily reside within the darkest places of the plane of shadows known as the Gloom. Their bodies have a deep connection with the Gloom, and even their Gloom-rat forms, which they can take at will, are seemingly composed of its essence, capable of reaching into the smallest of crevices to escape the endless predators of the Gloom.

Muri tend to stick together in groups known as a mischief. Until recently they were a desperate vagabond people endlessly roaming the reaches of the Gloom in search of safety and security, ever watchful and ever hopeful. The entities on the plane of shadows often saw the muri as nothing more than faint shadows moving along its fringes, while others viewed them as prey to feast upon, and they possessed no real allies until recently. The muri have ended up scattered throughout the Gloom, in small mischiefs, with few resources and fewer options.

The future of the muri changed forever when they discovered the initial ruins of Castle Mischief and its new ruler, a dark-haired, pale-skinned, green-eyed human woman who seemed to hold some dominion over the area and its surrounding shadows. The muri cautiously approached her after witnessing her destroy a large number of saforus in the area, and they came to an understanding. Lady Mischief, as they dubbed her, granted the muri protection in exchange for a tentative alliance and an eventual true partnership. After years of working together, she found them various places on the Material Plane in which they could reside, ending their lifelong flight against the predators of the Gloom. The muri, in turn, have begun to show up in various cities throughout Asarus, with larger numbers showing up in Isild and the surrounding area. They seem to have a significant understanding of the current affairs of Asarus, due to Lady Mischief’s teachings and have begun to integrate themselves into the cities of Vathis.

Physical Description: Muri appear as small humanoids standing only about three and a half feet tall, with dark skin the color of the night sky with hints of shades of violet or blue within. White freckles appear on the cheeks of their angular faces, which denote where their whiskers would appear in their rat forms. Large mouse-like ears adorn the sides of their heads that twitch to any noise in the area. The color of their hair typically matches that of the hair in their Gloom-rat form, with darker greys, blacks, or blue colors being common. Their hair is often streaked through with a second color, with blues, violets, or even dark reds being common. The large, round eyes of the muri are usually the same color as the streaks in their hair.

Muri age faster than most other races, reaching adulthood around the age of 14. The Gloom, however, has left them with lifespans moderately longer than humans, with many living to the age of one hundred and fifty. Muri families are usually larger than the families of most other humanoids, with mothers always giving birth to at least twins, and sometimes triplets or quadruplets.

Society: Muri rely on one another for nearly all things in life. They form close-knit mischiefs and almost never come into conflict with one another, with a strong belief that all muri are bound together. Due to the sheer number of enemies on the Gloom, muri have formed a reliant bond with one another and almost never lie, cheat, steal, or harm each other, as the failure of any single individual could lead to the collapse of the mischief entirely. As such, muri have formed a collective culture, with very few mischiefs having a singular leader. They instead allow all adult members of the mischief equal say in all matters relating to them.

As with all other elderlings, muri are capable of being Starcalled, and most mischiefs typically have a few Starcalled among their numbers. These members are viewed with great esteem by the muri and the Starcalled among them almost always look out for their fellow muri, utilizing their abilities to ensure the survival of their mischief. All muri are trained from a young age with various armaments in order to defend their mischief, and muri have a great history of utilizing a wide variety of weapons against would-be predators, steel, arrows, and magic among them.

Muri, as a collective group, tend to provide for members of their mischief but occasionally do trade and barter with other mischiefs for various goods and services. The mischiefs that reside in Castle Mischief have, under Lady Mischief’s guidance, moved to utilizing gold in order to facilitate transactions of value among the various mischiefs that reside there. Those muri who do traverse the planefalls into the Gloom are usually aware of the value that gold has among the civilizations of Asarus, and utilize it without issue.

There are rumors of great muri cities that remain hidden underneath the surface, ruined and scattered throughout the Gloom, before the great predators and various entities drove them out long ago. The only significant location of muri population exists in Castle Mischief and many aspiring adventurers among the muri have begun to seek out other muri mischiefs scattered throughout the plane to bring them to Castle Mischief for protection and prosperity.

Relations: While most muri are concentrated in the Gloom, many of them have sprung up in various cities throughout Asarus. The muri who transition to this plane are seemingly aware of both Vavalish and the customs of the world they find themselves in. Muri are generally accepting of new peoples and places, with a penchant for curiosity and learning new information. Muri tend to be wary of new encounters with those they meet, and it takes a significant amount of time for a muri to be truly comfortable with those outside of their mischief. Other races who have had contact with the muri typically view them with the same fondness they do for the inuzen, believing that, as elderlings, the muri have a deep connection with the Zodiacs. Most cultures the muri appear in are usually accepting of the new additions to their cities, both for the potential they provide and the information they can hope to glean from travelers from the Gloom. Many other races believe that if the muri could survive centuries in the Gloom they could provide great assistance in the event that another tragedy like the Darkest War happened again. Muri are quite fond of the eldric advancements of Asarus, reveling in the marvel of the convenience technology that has been created using those glowing crystals, and usually try to stay in areas where it is prominent.

Muri, even on Asarus, stick together with one another, sticking with or even forming new mischiefs. Mischiefs usually range from a few dozen muri to hundreds, depending on the location. Isild boasts the largest concentration of muri, with thousands of the elderlings showing up in previous months in the city of Dragonheart. Those who befriend the muri and prove themselves trustworthy allies find themselves holding the greatest honor among them as an honorary member of their mischief. Solitary muri are almost never encountered, as muri never willingly travel alone if they can help it. Those who do find themselves lost without their brethren seek out allies in the immediate vicinity on Asarus, though they are quite hesitant to trust anyone swiftly.

Alignment and Religion: Muri believe that strength in the mischief is paramount to all other wants and needs, and seek to help one another whenever they can, in order to avoid death at the hands of their enemies. Muri have a rich oral history of their people and wish to reclaim their lost homelands in the Gloom, but first and foremost, they must survive. With their arrival on Asarus, muri have sought to create relations and ties with the people and races they have found here, going out of their way to assist others in order to strengthen and create new bonds. They wish nothing more than to find a home where they can feel safe and protected, even if that home is far away from the Gloom they were born in. Muri are usually neutral good in terms of alignment.

Muri that have arrived in Asarus are known to worship the Astrian pantheon, with high regard for the Nightmother, and believe that her shadows have allowed their survival for so long. Muri, as with inuzen, hold the Zodiacs with great esteem as well, believing the portents of the Zodiac Leyline, seen by their seers, have allowed them to avoid great dangers in the past.

Adventurers: As a vagabond people, muri are intimately aware of the life of the traveler. Their innate curiosity, knowledge-seeking penchant, and the hunt for a new home have driven many of the muri to travel from the Gloom to Asarus. Muri have no qualms about seeking out new places and peoples, in search of allies and friends, and they have begun appearing throughout many cities throughout Asarus, usually with whispers of Lady Mischief and locations where she holds sway. As they drive to create lasting relationships with potential comrades, muri take on adventures and missions for various groups, especially when they can work together with other races to learn about these new lands and cultures. However, muri try to remain in groups with at least one other muri, even if they must go on quests with no other muri, they usually return to their mischief.

Names: Muri on the Gloom usually only communicate using their unspoken Vibrissaer, so their names are little more than gestures of their hands or whiskers. It wasn’t until they came into contact with Lady Mischief that they began to take spoken names for themselves. Names they take are usually derived from the same method as other Astrian naming conventions and are trait or adjective names. Sometimes a muri arriving in Asarus without a chosen name will simply choose a name or a word they find interesting, regardless of its meaning. Muri do not possess traditional lineage-based last names, as it is common practice for muri of a shared mischief to utilize that mischief’s name as their last name when dealing with muri from another mischief. They have kept this practice since transitioning to Asarus, and when they believe someone has truly become a member of their mischief, they often refer to that person’s last name as the name of their mischief as well.

To check out the new D&D 5e Muri racial traits, feel free to head over to our…