Tempestra, Born of Storms and the Wind 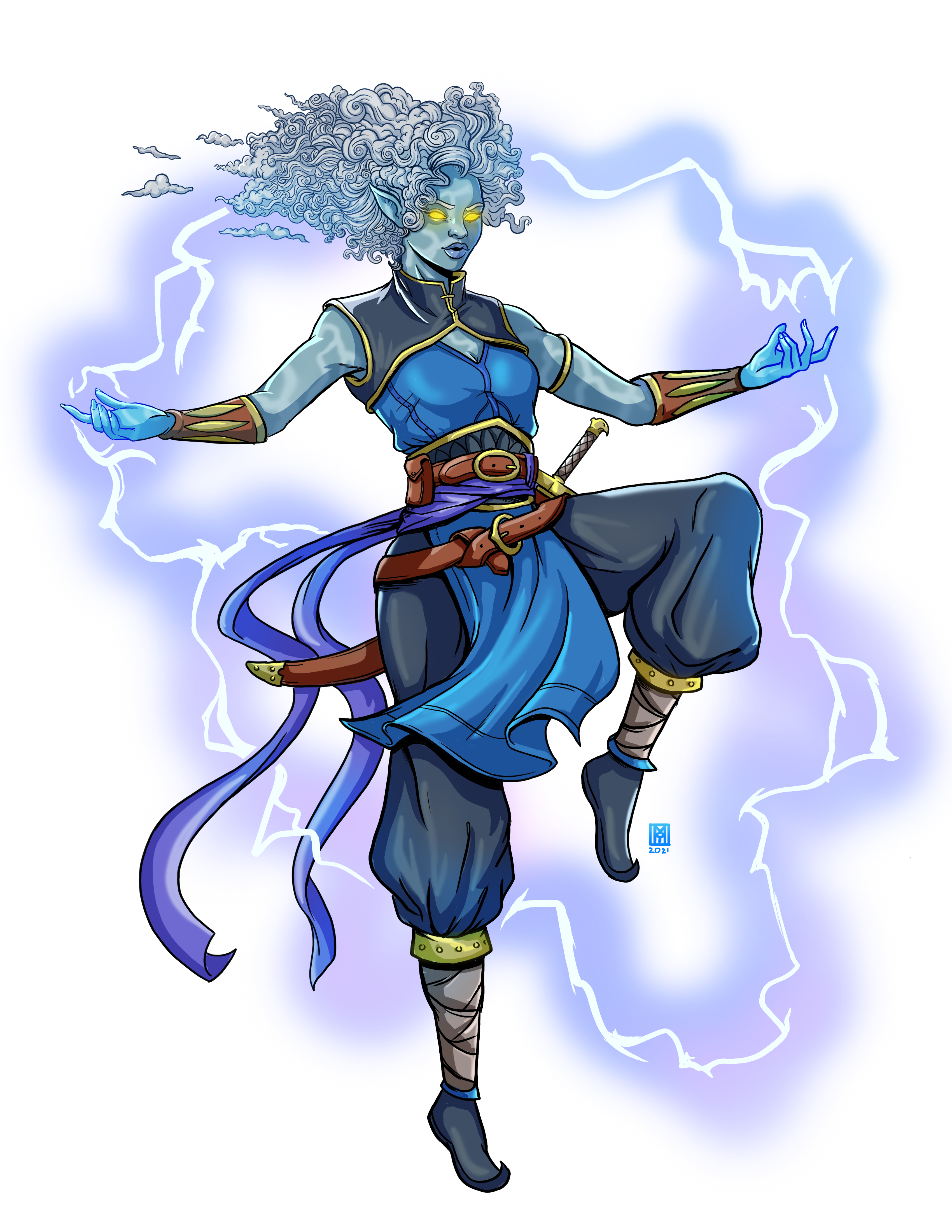 The swirling maelstroms and riling thunderstorms of the Manastorm Chain make it generally inaccessible to the majority of the world. The corrupted and twisted creatures that have been spotted in the region have led scholars to believe that any semblance of civilization has been lost in the wake of Karwytren’s death knell. Though the death of this Vandiel’s aspect was a major victory during the Darkest War, it did not come without a cost to the many soldiers from Leyathar, Tristan, Venoch, and Mythrayne who were involved in the battle leading up to it. In particular, the soldiers of Leyathar found themselves at the epicenter of the conflict, meeting their end in close proximity to the Vandiel itself.

Emerging from the endless lightning and thunder, the tempestra are the Arkhos Spawn created from the energies of Karwytren’s death knell and the leaking Arkhos energies from the Arkhos Tear the death knell created. They are beings of pure air and lightning who drifted down from the storms above the Manastorm Chain, landing on the islands below. Partially due to their natural resistance to the winds and lightning of the region, and partially due to their innate abilities to be more mobile than other races, the tempestra were able to band together in groups and navigate out of the Manastorm Chain. Working together many of them travel around the unclaimed lands east of the Lucia mountains, searching for clues as to how they came to be. In many tempestra, curiosity is a dominant character trait and has led to more and more of their population wanting to venture further away from the Manastorm Chain in hopes of discovering not only where they came from, but what their purpose is in the world they find themselves in.

The tempestra have been initially discovered in surrounding nations by scouts who have discovered one of many nomadic encampments of the tempestra traveling the unclaimed reaches of northeastern Asarus. While their existence has been met with some skepticism and hesitance, the good-natured and fun-loving tempestra have been able to show they mean the people of the world no harm. While the majority of the tempestra still exist autonomously beyond the borders of any nation, the ones who have made it to society as a whole are eager to integrate and learn of all the things in the world they only had a vague understanding of up until now.

The tempestra are an ever-shifting tumult of wind, lightning, and thunder contained in a solitary humanoid form. Their skin, or what one would consider their skin, is a shifting blend of grays and whites with an almost cloudlike appearance. The possess long pointed ears, much like an elf, and two piercing yellow eyes which lack pupils. Their facial features are striking and pronounced like those of an elf as well. The tempestra possess hair, or something similar to it, that tends to match their skin color with variations of greys and whites, with the ability to shift at a moment’s notice. It also consistently seems to be moving as if blowing in the wind. In general, their physiques tend to be lithe and lean, as if they were built for speedy and elegant movement.

Tempestra tend to be lean and light on their feet, possessing the innate ability to defy gravity and dance on the air for short periods of time. While able to physically interact with the world, the tempestra are abnormally light. Lifting one off their feet is easy, as if lifting a large container of air. The nature in which gravity interacts with their physical form varies from situation to situation, partially due to the strange circumstances of the forces that created them.

When they spawned, many of the tempestra found themselves initially alone, wandering the stormy landscapes around them. Whether instinct or something else, they naturally would wander searching for others like them. Gradually tribes of tempestra began to form and ultimately develop their way of life. Through perseverance and time, the tribes eventually made their way out of Manastorm Chain and continued travelling with each other on the mainland of northeastern Asarus.

The nomadic tribes of the tempestra speak to not only their social tendencies but to their entire physical existence. The phrase “go where the wind takes me” rings all to true in the minds of these eccentric and spirited people. Culturally, they want for very little and prefer to live simple lives off the land itself. They erect simple huts and tents out of animal skins and logs that only last for a short while until they ultimately decide to move on. Their clothing tends to be colorful and playful, to reflect their personalities, but is generally simple and easy to move in by design. Tempestra are also lovers of music and sport, expressing themselves and challenging their physical capabilities at any chance they get.

When tempestra undergo the merging, storm clouds brew and an influx of lightning strikes fills the area. The two tempestra undertaking the merging rise up into the clouds for a few hours and then ultimately drift back down to the ground, baby tempestra in tow. The resulting storm, however, is said to last for upwards of a week. This accounts for many tempestra remaining outside the confines of normal civilization and sees them returning to the proximity of the Manastorm Chain, where such storms are a normality.

Tempestra have found increasing kinship with the elves of Leyathar and Venoch. In addition to some of their shared appearance, they have similar outlooks on freedom and discovery. The scholars of Synethil have proven key to unraveling the mysteries of not only the tempestra’s origins, but the origins of all the Arkhos Spawn as a whole. Venocian sailors have come to envy the ease their tempestra crewmates have in navigating the ropes and masts of their ships, making themselves a boon to any sailing crew. The tempestra find themselves seeking new experiences and wanting to see and learn more about the world so their presence is growing in all nations on Vathis.

The teachings of Teiris by any name strike a particular chord with the general temperaments of the tempestra. Her teachings of freedom and travel align directly with the nomadic lifestyle that so many of the tempestra have chosen to lead. Her affiliation with air and the wind also lends itself naturally to the tempestra. For members of the race who find themselves in other locales such as Tristan, the Nightmother has opened her arms to many of the skilled individuals who can serve the goddess with ease. In Mythrayne, Vangal and Aleydra appeal to the tempestra, who seek to defend those they care about and to learn of their true origins.

Tempestra naturally have a penchant for playfulness and wanderlust. They dislike being bogged down with rules and restrictions, preferring to go where they please and do whatever strikes them as the right thing to do. They are staunchly against strict laws and authority. The tempestra tribes exist and thrive due to a general understanding of peace and harmony, not only with each other, but with the world around them. While they have the abilities to defend themselves and act with malice, their general outlook is generally more peaceful.

Due to their lithe and quick builds, many tempestra find the path of a monk or rogue to fit them quite nicely. In addition, those with a penchant for song fit nicely into the shoes of a bard. Tempestran adventurers often seek adventure for the act of adventuring itself initially, though they are quick to take up worthy causes. Tempestra will leave the safety of their tribes in search of new knowledge, insight into their history or a way to better the lives of their people. More often than not, getting swept up in the chaotic world of civilization will prevent many of the tempestra from returning home. There are no bad feelings about this shift, however, as even the wisest tempestra of the tribes believe that preventing others from leaving is against what the tempestra as a people stand for.

The tempestra were quick to find one another when spawning on the Material Plane. The region they found themselves in was a constant grey and dark landscape with the sun shrouded from view. Rather than name themselves after what was around them, the optimistic and hopeful tempestra adopted the convention of naming themselves after simple ideals that they seek to find one day or phenomenon they hope to experience beyond the gloom of the Manastorm Chain. This sentiment has continued as tempestra have begun to undertake the merging, with new parents naming their children after an ideal or trait they hope their child will have as they grow up.

To check out the new D&D 5e Tempestra racial traits, feel free to head over to our…