Pyran, Born of Lava and Brimstone 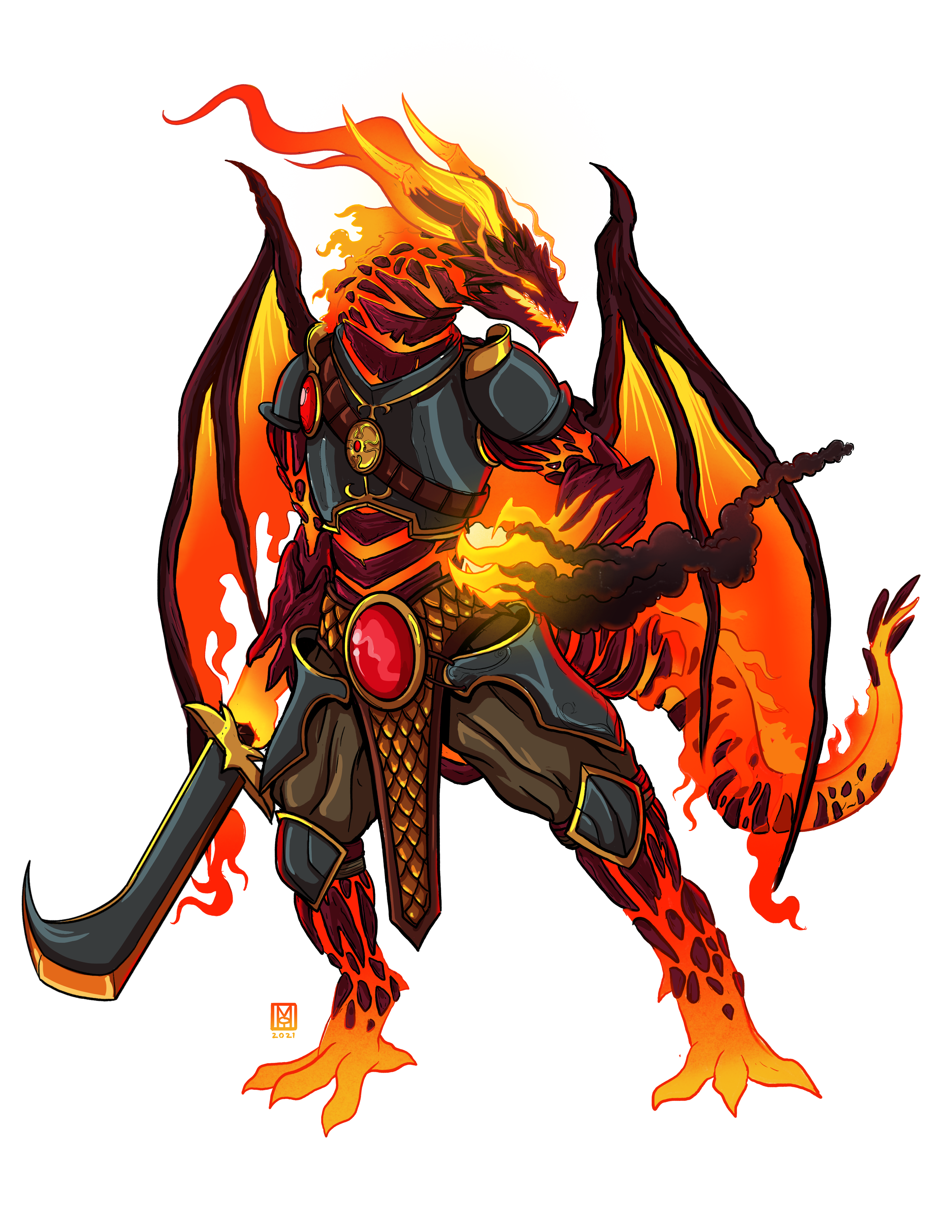 The Ixen Caldera is a burning wasteland of molten rock and brimstone. The heightened volcanic activity and seismic shifting make it a deadly expanse of terrain for even the most capable individuals who would attempt to cross it. This fiery phenomenon was the result of one of the most cataclysmic and costly victories of the people of Vathis during the Darkest War. To defeat the aspect of the Vandiel known as Monaxel, the vasar of Darastrix utilized a powerful ritual fueled by vaedric eldria to bring the floating mote of Kruellia crashing down on top of the fiend. The ensuing death knell permanently altered a portion of the Darastrix landscape, creating the Ixen Caldera that we know today.

The pyran are molten rock and flame suffused with the energy of the Arkhos, given a humanoid form by the souls of the people killed in the death knell of Monaxel and the events leading up to it. The first pyran emerged from the Ixen Caldera itself, waking up with no recollection of where they were or who they were in the life before this one. Much like Ildera, pyran are spawned with general knowledge of the world around them. While this can’t be confirmed, the amount of knowledge they possess seems to be tied with how much life experience they had in their past life, though specific details of who they were or what they did in their past life are lost forever. The souls of their past life also seem to have some bearing on the form the Pyran take when spawning, with their physical forms taking on distinctly vasar-like racial traits.

The pyran were initially discovered by a joint coalition of forces sent to deal with various Shattered Hand movements within the Ixen Caldera. This coalition was composed of forces from Vavaire, Darastrix, various Free Companies, and simple mercenaries. Upon discovering the pyran, this coalition worked to get them to the surface and out of the volcanic wasteland. This has led to more efforts being organized to help the pyran escape the Caldera and start a life in Vathis.

Pyrans possess a large humanoid build with a draconic visage. They stand about as tall and wide as a vasar, and have similar looking clawed hands and feet. Their entire body appears to be made up of molten rock and flame. A consistent molten glow can be seen under the surface pieces of stone and earth that comprise their form. Pyran eyes have no pupils and are a glowing orange or red hue. Pyrans usually have flames that flit off the tops of their head that they can control to some extent. They also have the ability to manifest wings that appear as beautiful spans of flame, which they utilize to great effect in combat.

The energies that created the pyrans allow their bodies to interact with the world around them without burning everything they touch, effectively containing the heat of their molten essence within. Their bodies are significantly warmer than normal humanoids in any condition and are especially resistant to heat, however, they can still be affected by most things in the world in the same way a human would be affected. They will wear clothing to stay warm, require food and water to survive and sleep at night to regain energy. The full extent of how long a pyran can live is yet to be seen.

Having manifested in and around the Ixen Caldera, the first memories of many pyran are sweltering hot caves full of lava and ash. Through sheer determination, force of will and potentially fate many pyran were able to find each other in the perilous caves of the Caldera. Through these meetings, small groups and societies of pyran began to form. The goal of many of these groups was to reach a world outside the Caldera. Some inevitably perished, releasing their souls back into the tumultuous energies of the area, but those who were successful have generally stuck together in the outside world, leaning on the bonds they made from their first few days of consciousness.

These traveling groups and communities of pyran that have appeared are heavily loyal to one another as their trust has been strengthened by their harrowing journeys out of the Caldera. They view their groups as a family. Any pyran to spawn as children are taken care of by those who spawn as adults. They’ll often choose to call other pyran from their group brother or sister and rely on them even after reaching the wider world. It is not uncommon for pyran groups to settle down in the same area so they can face the trials and tribulations of a world, unfamiliar to their kind, together. Pyran who choose to undergo the merging are limited as to where they can create their child, often traveling back to the Ixen Caldera to do so. The pyran merging consists of both participants being submerged in a pool of molten rock and earth that appears during the start of the process. It is considered the most dangerous merging ritual among the Arkhos Spawn.

After leaving the Caldera the pyran have generally ended up in both Darastrix and Vavaire. Some have traveled farther, but due to their lack of property in general and the close proximity of the two nations, they are the logical places for them to settle. While their fiery appearance can be offputting for someone unfamiliar with their race, the pyran have taken strides to portray themselves to their new communities as positively as possible. As a people, they have a general affinity for family and community. Pyran who find themselves alone without others of their kind are quite often prime candidates for Free Companies or even adopting the Sky Dragon way of life as they seek a sense of camaraderie these groups can often provide.

Before leaving the Ixen Caldera, the pyran had no context for religion. While they had general knowledge of what a deity is and the concept of a higher power, the specifics were lost on them. For this reason, pyran tend to adopt the beliefs of the places they end up after leaving the Caldera. Even afterward there is a natural tendency towards Naugrix and Kato-based religions, with Naugrix being a bit more widely accepted. This is due to the negative connotations of Kato in many places. Naugrix, however, is embraced due to his affinity for mountains and earth. In addition, the pyran seem to flock towards any sense of family and loyalty in their beliefs. Vangal and Bastion appeal to many due to their ideals of protection and peace.

Most pyran understand all too well that they are a new occurrence to the world. They are aware that their appearance is foreign and usually a bit alarming to those unfamiliar with them. To offset this, there is an emphasis among the pyran to show that they can be integrated with society and are helpful to those around them. Because of this many of them lean towards a lawful outlook on the world. Just like humans though, there are always exceptions to this and the range of good and evil intentions in pyran vary immensely.

Between their physical prowess, previous travels out of their birthplace, and general desire to prove their worth to society, many a pyran finds themselves seeking the life of an adventurer. Their unique visage and fiery appearance often cause them to be viewed as more capable than they might actually be. For most pyran adventurers, the job is a sink or swim situation. They seek to prove themselves to those they travel with as well as prove that their people can be accepted into the world. Stories of pyran in battle with wings of fire lighting up the battlefield are told frequently by the bards who witness them in action, something the pyran hope improves their reputation among the other people of Vathis. In addition, many pyran turn to the life of an adventurer in hope of finding out how they came to be.

Having awoken on the Material Plane in a landscape of fire and brimstone with no memories of before and no reference to the world they now inhabit, names often came secondary to survival for most of the pyran. However, with time and after finding one another, names based on their traits or the world around them became common. In addition, those with certain tenacity or creativity would choose a name for themselves. Upon escaping the clutches of the Ixen Caldera many pyran changed their name to something else or adopted other names based on how they were referred to by the people around them. Notably, many of the pyran have not adopted surnames. Instead, as a community it has become a common practice to use the word “Pyran” as a surname, emphasizing the community and connection they feel to one another. There are, of course, many exceptions to this in practice due to the odd circumstances of the pyran’s creation.

To check out the new D&D 5e Pyran racial traits, feel free to head over to our…