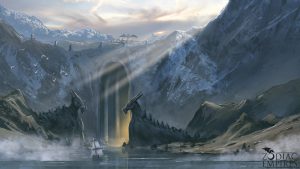 The dwarves of Mythrayne possess a long and varied history that they have passed down for eons. This history has become a cornerstone of Mythric culture and guides the choices and everyday lives of the dwarves. In order to preserve their history, and the history of the world around them, the college of Jordensang was created to perfect the art of maintaining the stories of the past so they might be used to inform those in the present. Dwarves and other individuals come from all over Vathis to attend Jordensang and learn the advanced storytelling and oratory techniques the college specializes in.

While the college began as a simple school for bards and historians, Jordensang slowly perfected their specific bardic techniques and grew into a specialized center of magical power that has informed every important decision Mythrayne and its leaders have made in the past several centuries. The present-day college is one that specializes in utilizing the power of spoken word to inflict magical effects on the listeners of the speaker. By channeling magic through their voice, the members of Jordensang are able to produce advanced bardic techniques and effects without the use of anything but their own vocal chords. As time has gone on, the bards of Jordensang have developed stronger and more impressive effects with their vocal abilities. The power of their voices not only allows them to create advanced magical bardic effects but has been said to give the most powerful practitioners of the technique the ability to garner aid from the spirits of their ancestors.

While the college has slowly grown in power as time has gone on, Mythrayne itself has gone through many changes and is but a shadow of the vast Dwarven empires that existed at the time of the college’s inception. In joining the empire of Leyathar, Mythrayne was able to preserve their cultural traditions, the college of Jordensang included. However, by this point, Jordensang had been trying as hard as possible to preserve what little of Mythrayne’s culture they had managed to hold onto in the past several centuries. With Leyathar’s help, Jordensang and all of Mythrayne managed to finally reverse their downward trend and begin growing again as a civilization. With the advanced magical knowledge of Leyathar, Jordensang was able to grow their magical capabilities to new heights and hold onto them even after the disappearance of Synethil and the fall of the empire.

In the present world, Mythrayne looks to Jordensang yet again. The nation managed to survive the Darkest War and now turns to their traditions to guide them out of the darkness and back into an age of light and prosperity. At the center of their traditions sits Jordensang. The college serves alongside the leadership of the country, guiding its people back into the cultural glory they once had. The oratory magics of Jordensang have allowed them to not only preserve their history but benefit from it in ways that most nations could only dream of. The new heights of Jordensang and its insight to the past have sparked a new resurgence in the college, with new branches opening up throughout the nation as well as within the borders of Mythrayne’s closest allies, Sillirai being the most willing adopter of their traditions. With time, Jordensang hopes they can use the secrets of Vathis’ history to restore the world to a golden age in the wake of the massive tragedy that is the Darkest War.

To check out the new Mythric Dwarf Subrace for 5e, head on over to our…