Technology in Rancagesh, How the Modern World Influences a Spiritual Tradition 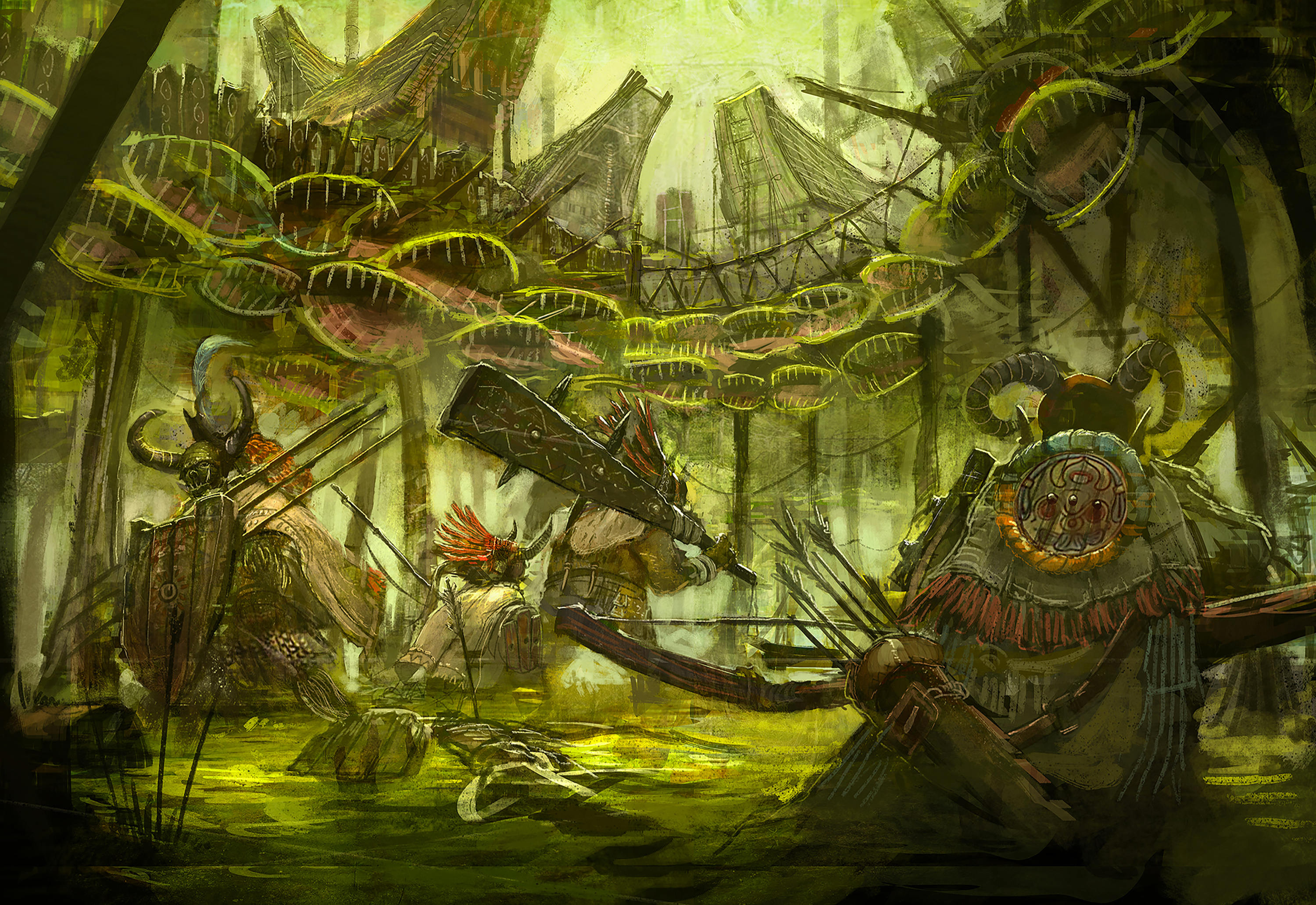 It is widely accepted throughout Vathis that modern technology and advancements in the use of airships and eldria are indications of progress and the growth of civilization as a whole.

However, there will never be an instance of progress that does not clash with tradition. This convergence is no better exemplified than in the fledgling nation of Rancagesh. Deep-seated tribal traditions and reverence for natural and druidic magic amongst the rancar has made them, understandably, hesitant to embrace many of the advancements the rest of the world has created. This outlook has begun to change drastically in the wake of the Darkest War as the people of Rancagesh have come rely on the advancements of the modern world to rebuild their ravaged homes. The conflict between those who wish to stick with traditional values and those who embrace the future is one that is constantly evolving and growing in Rancagesh.

Rancagesh exists in a unique position in the world. Their government and culture are dominated by old values that predate most of modern civilization.

These values trace their roots back to the immensely powerful druidic magics and capabilities of the past. Shamans, druids and other practitioners of the ancient art of Arkspeech were once seen as the dominant magical force in the world. These magical capabilities allowed the rancar to yield bounties of food, construct immense structures and control the very jungles themselves to defend their homes. For centuries the rancar people held the power of Arkspeech. However, much like the magics of the rest of the world, Arkspeech and the druidic ways of Rancagesh slowly faded and weakened. The enslavement of the rancar led to many of the older cities of Rancagesh to be lost to time. The druids of old began to die out and the practices and rituals of Rancagesh became nothing but myth.

Rancagesh was first recognized as a nation at the end of the Tretolanchan Wars, a few years before the outbreak of the Second Empire War.

Much of the new nation’s government and decision making bodies were composed of once enslaved tribal leaders who fought the oppressive Oseptian slavers for their freedom. With great hopes of seeing Rancagesh return to their former glory, the new leaders of Rancagesh attempted a revival of their old ways. They sought to relearn Arkspeech and grow their pool of druidic and shamanistic knowledge from the ruins of their former glory. During the formative years of the fledgling nation, eldria and most other forms of eldric tech or arcane magic were looked down upon in Rancagesh. These items and magics were seen as ‘The Tools of the Oppressors’ and acted as a symbol of the continuing slave trade in Osept, of which many Rancan tribes and individuals were still a part of.

The Darkest War changed the trajectory of how magic would be used in Rancagesh moving forward.

On one side of things, the return of Synethil brought with it the return of all major magic to the material plane. This included Arkspeech and the druidic practices that Rancagesh was seeking to cultivate. This great boon allowed Rancagesh to survive the harsh conditions of the Darkest War and survive into the present, but not without loss. Rancagesh was hit just as hard as any nation during the Darkest War. Swathes of gnolls and other fiends razed many Rancan settlements to the ground, and the people of Rancagesh found themselves needing to rebuild when the war finally came to an end. During this period, the other nations that helped Rancagesh gain its independence and be recognized by the Council of Vathis did what they could to provide Rancagesh the tools they saw as necessary to rebuild.

The result of these restoration efforts was a large surge of eldric technology in Rancagesh in the past few years.

Many who once were opposed to eldria no longer hesitated when their people were homeless and suffering. Seeing that eldria and the advancements it brings could help their people, especially when combined with their resurgence of Arkspeech and druidism, led to a unique mix of druidic and eldria infused construction throughout the fledgling nation. Airship towers molded from great trees began to dot Rancan skylines. Eldric lamps hanging from vines began lining the city streets. From the darkest point in the country’s young history it emerged into a new age where its tradition and the advancements of the modern world were married, and it has led Rancagesh to thrive in this tumultuous time.

For access to some 5e items to make your life in Rancagesh easier, please follow the link below to our…