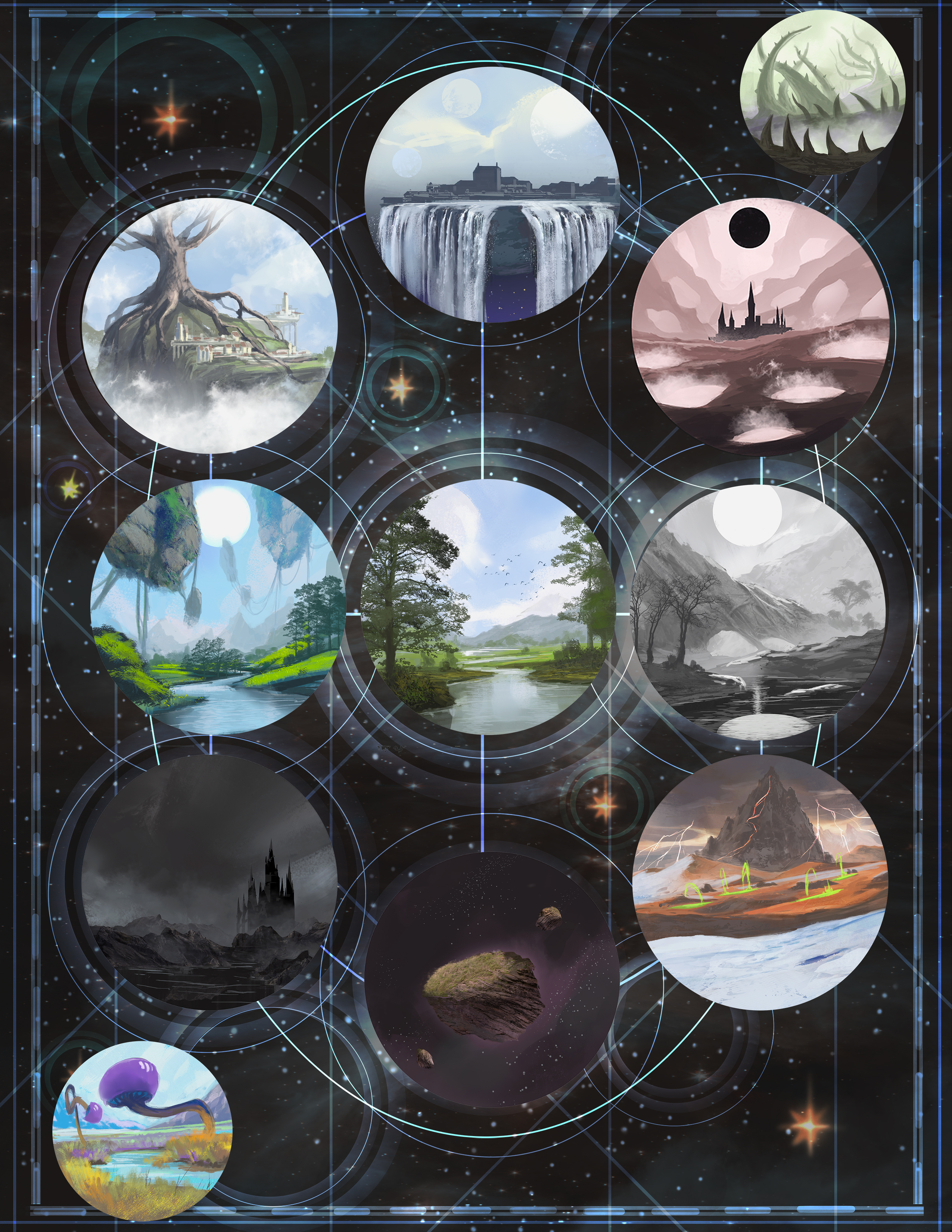 Within the cosmology of Zodiac Empires there exists three primary realms that encompass most of the known planes of the multiverse. The first of these is the Eternal, which are a group of divine planes situated at the highest reaches of the cosmology. The middle of these is known as the Arch, the home of the Material Plane, and its mirrors. The bottom of these is known as the Vast, home to the churning primal energies and the darkest beings in the realms.

The Arch is unique among these three, for many reasons. The Arch is home to three primary planes of existence that ebb closer and farther away from one another. The Material Plane exists as the natural world, where all known civilization resides, where the dreams and aspirations of mortals takes form. The other is known as the Vibrant, brilliant in color and light, where the realms of the fey Radiant Regents vie for superiority over their plane. The last plane is known as the Gloom, an eerie realm of dim greys and a dark sun shine over the shadow of the Material Plane.

As these planes move about throughout the Arch, they come in contact with one another and it is in these locations where planefalls exist. Planefalls are areas where the veil between these planes becomes thin, allowing purposeful or accidental transitions from one plane to another. In turn, the planes seep into one another, creating a wide variety of unique circumstances and effects on the local area. Unless the traveler is familiar with the process and knows what to look for, many individuals end up accidentally transitioning between these planes, often without realizing they have done so. Should the circumstances that allowed the planefall to take place change, this could leave the traveler stranded on a plane quite unfamiliar to themselves.

Planefalls from the Material to the Vibrant and back are rare, but commonplace enough for them to be documented, such as in the Leyathar Forest where Synethil resides. In this location, and many of the deeper reaches of the world, inuzen have been traversing the fabric between planes for centuries, even going so far as to build their cities purposefully so that they transition fully between the planes. The Vibrant has had a significant impact on the history of the Material Plane, especially in recent years with the return of Synethil and powerful magic.

Planefalls from the Gloom and back are a different story entirely. The Gloom itself is quite remote from the Material plane, and the places where the veil is thin are incredibly rare. Those that have found them has described them as deep places of quiet, where the shadows seem thicker than usual and light seems to be eaten by the darkness beyond. Some have described eldric lighting to become dim, flicker, or even disappear entirely. Often these places are discovered during the night, so many accounts of Gloom planefalls are often misattributed to the usual darkness of the night. Very few have fully made the transition in the Gloom and returned to tell the tale.

To check out the new D&D 5e Planar Traveler background, feel free to head over to our…