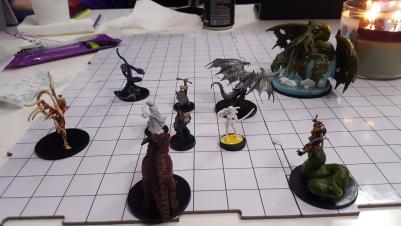 Obviously the dream of most tabletop games is to run a sprawling campaign from start to finish with characters that become as much a part of you as the friends you’re playing with. However sometimes, it can be fun and even beneficial to stray from this path and run a one-time session with some throw away characters you’ll never see again. I’m going to take today’s post and talk about the wonderful benefits of running one shots with your group and why I think it’s important to do so every so often. For the purposes of who this is directed at, I want to specify that running a one shot shouldn’t be something only the GM decides to do in a gaming group. In order to get the most out of a one shot the entire group should be excited and wanting to play the scenario.

When do we run them?

There are several key times in a gaming group that I feel are ideal for running one shots. The first is probably the most obvious. All groups have trouble with scheduling. It’s difficult to devote a regular four or five hour block to play a game. Things like school or work or family obligations are always popping up and getting in the way of table top groups all over the world. Have a friend out of town for this week’s session? Perhaps it’s an ideal week to run a one shot in their absence. That way they don’t miss out on the story and everyone else still gets to scratch that itch.

Most groups will find that between campaigns is a wonderful time to run one shots. Let’s say your party has vanquished the elder dragon, retrieved the legendary sword and has risen to the status of demi-god. The story is over and these characters can retire. Your GM is also probably exhausted as all their plots have finally come to fruition and they’ve been dealing with the stress of this resolution in their prep work and are satisfied to see it all play out. Rather than make that poor soul jump right into the start of another plot web with all new characters, maybe give them a break. Let someone up step up and run a one shot and give your GM a chance to play. It’ll let you all clean your palette of the last great adventure as well as get you excited for what you’re doing next.

The last time to run a one shot I’ll mention is a special one. There are certain times of the year surrounding holidays where everyone gets into the spirit of the season. Whether it be Halloween with all the spooky fun that comes there, or the Winter holidays with the general feelings joy and goodwill pervading the air, or even Valentine’s Day when everyone is enraptured with love and romance, a holiday one shot can be fun if everyone is in the holiday spirit. These one shots let your group celebrate the holidays together in your own unique way and often times let you do or try things in your games that you never normally would.

Why do we run them?

While there are tons of reasons to try out one shots, even ones I’ve already touched on above, there are a few key reasons I want to touch on. The first is my personal favorite reason to run one shots, and that is to try different systems. Most groups will have their go to systems. These are the ones they use for their long term campaigns. They’re the ones that everyone in the group is familiar with and generally the systems that work well for the group. However, much like food, you can’t be sure you’ve found your favorite unless you’ve tried the alternatives. Using a one shot to experiment and try out new systems is a great opportunity. Sometimes it can even lead to groups finding a system that they enjoy even more than their usual ones.

My second reason to run one shots is a bit wider in scope. One shots are an ideal time to experiment with the system you’re using and the things you can do with the game. Players can use one shots to try out new and interesting character ideas. They can even try out a character that they might end up using for a long term campaign later on. GM’s can try and do interesting things that they might not feel comfortable doing in a long term campaign. Perhaps there’s a monster they’ve really wanted to use but narratively it hasn’t made sense to throw at their party. A one shot is a perfect place for something like this. This extends ever further as well. One shots are a great place to try out all the weird ‘what ifs’ you have as a group and do so without compromising a long term game.

Finally, what could be considered the most important reason to run one shots, is to give your GM a break. Most groups have a designated GM. This person generally is the one who runs the games 90% of the time and is almost expected to fill that role. Even if they’re perfectly comfortable doing so, it’s always nice to give them a reprieve once and a while. I encourage players everywhere to step up and volunteer to run a one shot on a week that it makes sense to. Give your GMs a chance to be on the player side of things, after all, they generally like to play too. A one shot is a perfect way to let them pick up a character sheet and let loose for a bit. It lets them recharge the parts of the brain that they usually use while running the game and stretch some of the parts that usually stay quiet. Most importantly, it can give them time and inspiration for your long term games that you might never expect.