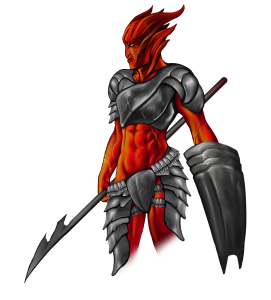 Within the pages of The Creatures of Vathis we will be including a series of new creature types. For the next few weeks we will be posting spotlights that provide our readers with a little bit of insight into what the new types are, why we decided to create them, and what sort of abilities creatures of those types may possess.

In this spotlight we will be looking into the agents of the Shattered Hand, known as the Vastborn.

Vastborn are created through nefarious means by the Vandiels of the Shattered Hand. They are both footsoldiers in the Vandiel’s never-ending wars of conquest against the Deities, as well as generals and lieutenants in command of their formidable armies. Vastborn come in a significant number of forms, from the lowly vastling, to the mighty Vantus. Overall, they are powerful otherworldly fiendish entities, with appearances and abilities to match the hellish landscape from which they are spawned. Vandiels can create any number of vastborn utilizing the souls of mortals as fuel to form their bodies and minds. Vantus, on the other hand, take a significant portion of a Vandiel’s personal essence to create, thus limiting their overall scope and number.

Vastborn ravaged the lands of Vathis and killed countless mortals in an invasion known as the Darkest War.

In the early years of the Darkest War the vastborn quickly overcame the defenses of the mortal realms, as the nations of the world were not prepared for the war mechanizations of otherworldly foes. When the vastborn’s might was paired with the intelligence gathered by the noir, the Shattered Hand rapidly occupied territory all across the continent of Asarus, ending countless lives in the process. The vastborn are wholly loyal to the Vandiel that created them, giving the Shattered Hand incredible morale and control over their forces. As otherworldly entities the vastborn are single-entity creatures whose body and soul are one in the same. Upon death, vastborn are simply recreated on their home planes of the Vast, making them unfearful of death. The only being that can truly destroy a vastborn is the Vandiel that created it.

Next week we will be looking into the ancient constructs of the Anuald. Beings of this new type are known as the Forsaken!