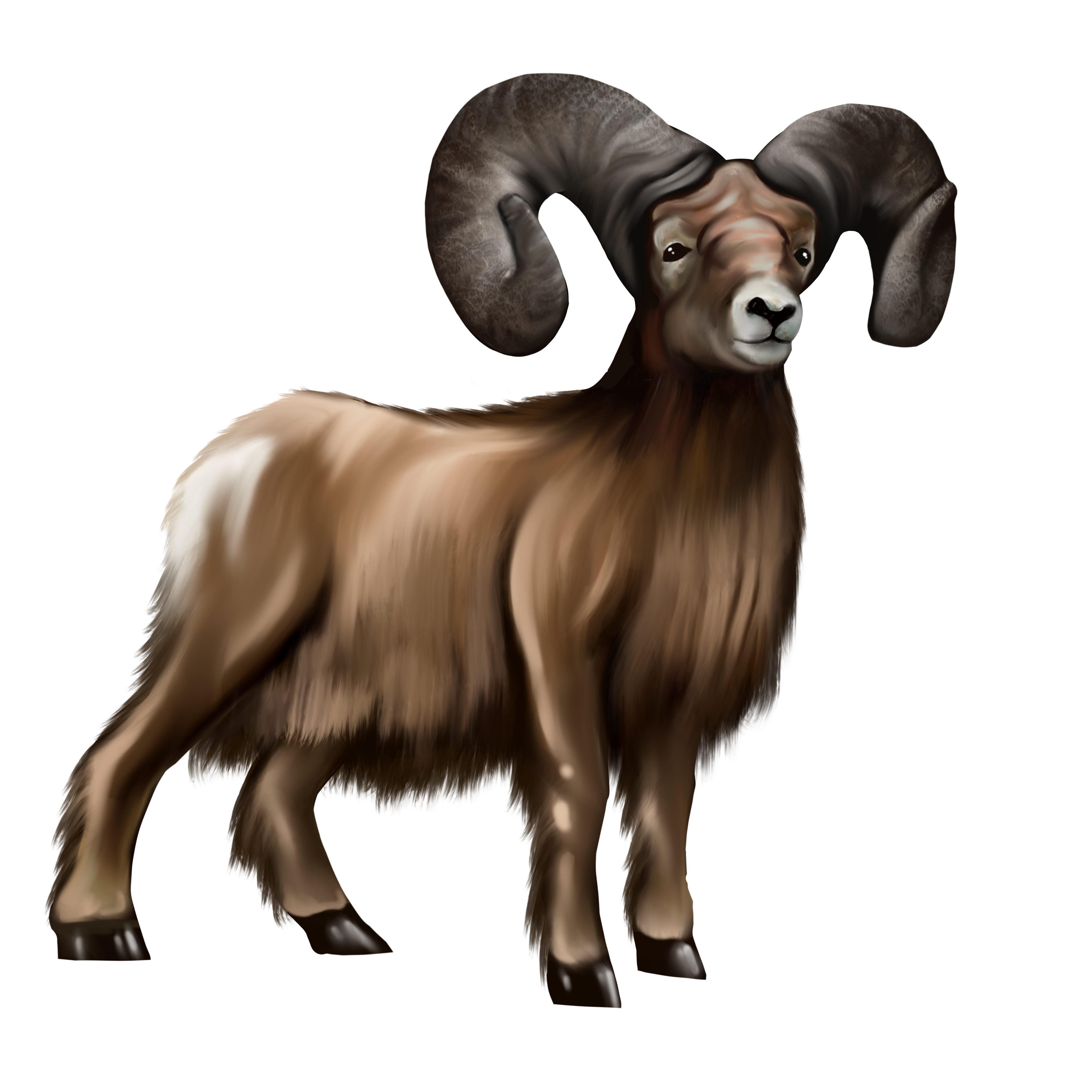 Mythric rams are the chosen mounts of the dwarves of Mythrayne.

Much like dwarves themselves, they are sturdy and reliable. They are natural-born rock climbers and skilled leapers who make their homes on the mountains and cliff faces of Mythrayne, jumping from outcropping to outcropping in agile displays of their impressive mobility. In some dwarven festivals domesticated rams are brought out for show, and horn size and shape are measured in competition. It is also common for dwarves to race one another up a  cliffside and show off their ram’s agility in good-natured displays of sport and showmanship. This creature is beloved by the dwarves, and is depicted favorably in many of their famed runic carvings and Jordensang epics. If given the choice to ride a horse or a Mythric ram, a dwarf from Mythrayne would pick the ram, every time.

Mythric rams can be any natural hue of brown, grey, white, or black.

They have dense fur that protects them from the wind and cold frequently found on mountains. These thick creatures can be up to 350 lbs in weight, and live for nearly two decades if cared for properly. Mythric rams are strict herbivores, and they live on the sparse and tough vegetation found within Mythrayne, such as mountain grasses and lichen. They are natural grazers who move from location to location in searching of fruitful fields. Mythric rams flock together, and they show their aggressive tendencies when competing for resources. They frequently lock horns and butt at one another to prove their dominance. As a species have few natural predators, but large eagles, condors, and mountain-dwelling beasts pose a very real threat to the rams.

In early exploration endeavors, Mythric rams were domesticated by the dwarves to traverse the mountains where dwarves found it difficult to secure stable footing.

They soon became beasts of burden, as they are able to carry heavy supplies up the cliffs and caverns of Mythrayne with ease. They’ve proven themselves useful time and time again, and in wars throughout all of recorded history they’ve been ridden into battle. Their riders frequently decorate their great horns with jewelry or weaponry. They may also paint their horns with runes of cultural significance, or glorious miniature battle scenes. Due to their size, Mythric rams are not an intuitive mount for the taller races of the world, but the dwarves are proud of this fact. They can be found anywhere where one might find dwarves, or have need of stabling a dwarven mount.