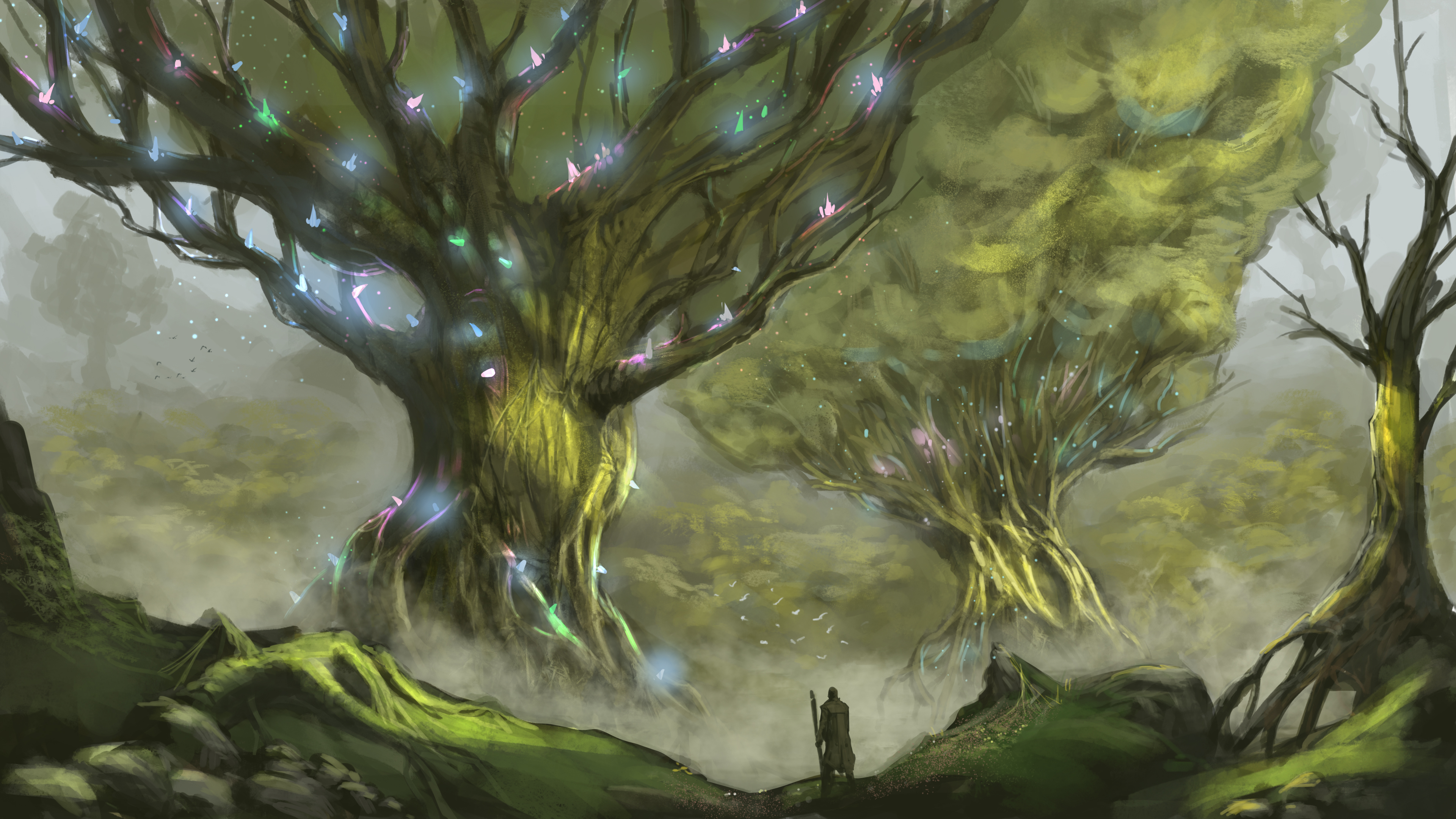 In an age long past, the psionicists of old learned how to communicate with the intelligent laris trees thriving in the region of the world that would one day become Sillirai. The two species realized that they could mutually benefit from a permanent psionic bond, and after much trial and error, a psionicist created the first true bond, allowing amari and laris tree to share feelings over nearly any distance. This bond heightened the psionicst’s power considerably. Others hungry for the same power and bond recreated the ritual, slowly transforming the amari into the race they are today. As a result of the bonding process becoming widespread, the amari inherited the long lifespan of the laris trees and a direct link to their psionic power, which now runs innately through every amari’s being. The laris trees gained perspective, experience, and knowledge from the arrangement – a truly worthy trade for the laris trees, who were fashioned into being by the goddess of knowledge herself – Aleydra.

Laris bonding is now commonplace and expected of all amari. The bond between laris tree and amari is thought to be a wise and tempering force guiding the amari through life. It is also a divine calling to the amari, as both creatures are thought to be Aleydra’s sacred creations. The church of Aleydra often preaches on the sanctity and importance of the laris bond. Amari are expected to become bonded sometime in their first century of life. Laris bonding is always mutual, and it can take multiple expeditions spanning years for an amari to find their bondmate tree. Those who are born and raised abroad are forced to return to Sillirai to accomplish this daunting task. Some are lucky enough to find a tree to bond with in the limited laris groves that exist beyond the sprawling forests of Sillirai, but this is rare.

Those of other races often misunderstand laris bonding. They may find it strange, or invasive, to imagine living with the presence of another being in the recesses of their mind. Most amari describe their laris bond as a comfort – after all, they are never truly alone. All amari bond and all laris trees share their own feelings and energies with others in their grove. In that way, all amari and laris are connected. A shared connection to the laris is the one cultural constant holding the amari together – and those who forgo the bond face just yet harsh consequences for their perceived deviancy.

Some amari never forge a psionic bond with a laris tree. These individuals are usually either uninterested in sharing their minds with another living being, or unable to find a laris who calls to them. Though rare, these amari are known as the Bondless, and the majority of the amari race consider them misguided, naïve, and lacking the innate morality and sense of direction provided by the ancient laris bond. They are often viewed as ‘unworthy’ of the bond – they must certainly be horrible people by nature for no laris to want to their share mind. Even though the amari deem themselves an open-minded and accepting sort, they treat their fellow Bondless as they treat outsiders – with an excess of condescension and subtle scorn. As such, most Bondless lie about their status and take their secret to the grave, typically only confiding in the official church of Aleydra.

The passing of one’s first century without bonding is generally the delicate turning point between the ‘not yet bonded’ and the truly Bondless, and this is the point where Bondless may start lying to those they love about forging a link with a tree. Keeping one’s psionic bond (or lack thereof) a secret from others can be painful, but it is done by many. The bond between laris and amari is solely interpersonal and difficult to detect by even the strongest psionicists in Sillirai. This is fortunate for the Bondless, as most manage to live normal lives and allow others to assume that they, too, share the inner workings of their mind with a tree. Some select amari are capable of digging deep into another’s thoughts and uncovering the truth, but this would be received as a mental attack and is culturally taboo to even attempt.

When a Bondless is discovered they risk ostracization, prejudice, and in the case of nobility, a complete stripping of their land, titles, and family name, as a laris bond is a formal requirement of Sillarian nobility. This status is simply taken at the noble’s word, however, and no formal ceremony exists to confirm a noble’s status as Bonded. Many amari believe that the Bondless are not just unnatural, but also unholy: The laris and their ability to link minds with the amari is known to be as a sacred gift granted to the race by the goddess Aleydra, and to be Bondless is to slight her divine grace.

Despite this widespread belief, Aleydra’s organized church offers the greatest level of care and compassion for the Bondless. Priests and priestesses of the goddess will humbly listen to the confession of a Bondless and never breathe a word of their status to another living soul. They offer their services and consultation to the Bondless as they would to any other faithful of Aleydra. They respectfully hear the wills of the Bonded and the Bondless alike, and the Aleydran clergy plan funerals for both groups impartially. Graveyards of Bondless exist deep within laris groves where the departed may finally be at peace.

To check out the new D&D 5e Sillarian Spells, and Amari racial traits, feel free to head over to our…